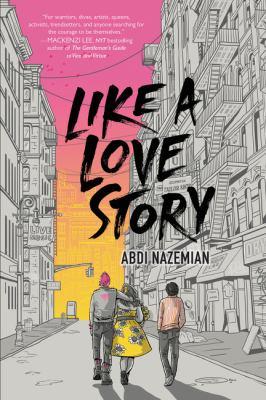 Reza has just moved to NYC by way of Toronto via Iran. His mother has remarried and they have moved and now live with his stepfather and stepbrother. He is anxious about starting a new school and a new life but he is mostly anxious because Reza knows he is gay.

The story takes place in 1989 the only images Reza sees of the gay community are those of people dying with AIDS. The thought paralyzes him with fear not to mention the cultural implications of being Iranian and gay.

At school, his first friend is Judy. She is an aspiring fashion designer who marches to the beat of her own drum. Her best friend is Art, who is the only openly gay student in their high school. Judy also has an uncle who is dying of AIDS and active in the ACT UP movement.

This book does a wonderful job of navigating all the topics it brings up. What it is like to be a young gay person who is so afraid of the stigma, of the violence and the disease that plagues the gay community. It beautifully depicted the gay community of the 1980's and the mentorship of Stephen to Art and how he helped him navigate his sexuality and helped him learn the history of their community. The character arc of Reza and his relationships to Art, Judy and his mother is also very well done. This book was poignant and very insightful with looks into the lives of these young people and what it was like to be gay and love gays in the throws of the AIDS crisis of the 1980's.