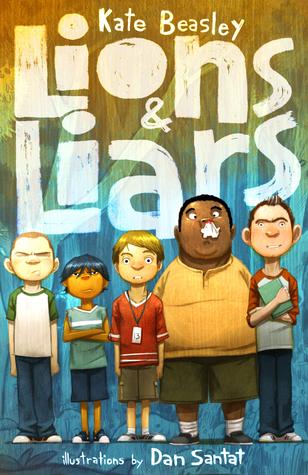 Frederick Frederickson is tired of being bullied by his friends and enemies at school. When a hurricane cancels his family's annual Christmas cruise, Frederick is fed up. He ends up in a boat on the river without a motor or a paddle. He comes ashore at a boys' camp for troublesome boys although he doesn't know that is what kind of camp it is at first. They assume he is Dash, a troublesome and infamous delinquent. He is assigned to cabin 13 with Nosebleed, Specs, The Professor, and Ant Bite. Frederick likes camp and the fact that he is not the flea in the food chain of life at there. He might not be a lion, but at least he isn't the lowest. When the real Dash shows up at camp everyone finds out who Frederick really is. Then the hurricane heads right towards them and things get interesting.

This was not my favorite book, but it wasn't horrible. I just never really got into the story. Why would a camp assume a boy in wet, dirty clothes with no bags would be one of their campers? Why wouldn't they believe Frederick when he tells them he is someone else? It seemed a bit far-fetched. He is a missing child afterall and you would think they would take that seriously. I liked the relationship the boys of cabin 13 form and their interesting back stories. I also liked that Frederick developed a bit more personality and backbone by the end of the story.