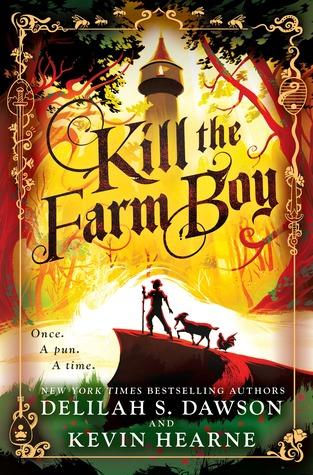 One of the last things that the farm boy Worstley expects is to have a surly pixie bestow Chosen One status upon him. Although the pixie giving his goat the ability to speak was also unexpected. Worstley and the goat, Gustave, head off to meet their destiny at a nearby bramble-encased castle containing a sleeping princess and her equally unconcious court. It seems like as good a place as any to meet one's destiny.

The absolute last thing Worstley expects to happen upon arriving at the castle is to have a very tall warrior woman in a chainmail bikini fall on him from a great height. He's unable to register his surprise at this event since it technically kills him. OK, not just technically. He's really and truly dead, with lots of blood and crushed bones and all that. Feeling tremendously guilty, the warrior woman, Fia, joins forces with Gustave and a cursed bard to seek out the might sand witch, Grinda, who might just be able to save poor Worstley (but probably not - he's really, really dead). On their way, they come across a rogue who's really bad at being a rogue who, as it turns out, was supposed to be relieving the farm boy of his heart on behalf of her employer, the Dark Lord Toby. Since Toby now also has a vested interest in seeing Worstley saved, he and his rogue, Poltro, join the party.

And then things get weird.

Kill the Farm Boy has been billed as a kind of Princess-Bride-meets-Terry-Pratchett, which isn't totally inaccurate, but isn't entirely accurate either. As with most humorous books, there will be some folks that will love every second of this book and there will be some that can't make it more than halfway through. Humor is strange like that. Fortunately for me, the sense of humor at play here mostly worked. There's a lot of wordplay and punnage and not shortage of absurd situations. It's quite clever, but there are also a lot of poo jokes. The humor (and subsequently, the pacing) lags a bit here and there, but it didn't drag so much that I lost interest. What I'm saying is, this book is unlikely to be everyone's cup of tea, but it worked for me and I grew to like the characters a lot. It made me a lot more willing to overlook any flaws.