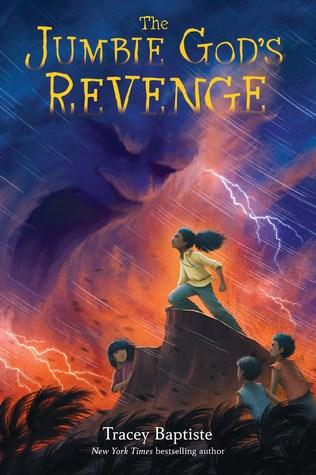 Corinne is back from her adventures with the mermaids and Mama D'Leau but she knows things are resolved yet. When an out of season hurricane hits the island, she knows something is up. Then another storm follows quickly behind it and Corinne learns that the god Huracan is responsible. It seems the jumbies had and agreement with Huracan that they would stay in their respective spots (land, sea, air), but Mama D'Leau and Papa Bois have broken that agreement to be together. Corinne herself unwittingly broke the agreement when she took Severine to the deepest part of the ocean.

I have really enjoyed this series. I love the story of the Jumbies and found this one particularly apt in today's environment. The Jumbies are hated and feared because they are different and not understood. However, during the height of the disaster facing the island they help the humans survive even though they are not welcomed by all. I found so many parallels between this story of the Jumbies and our current political situation whether they were intended or not. I loved the end of the book where everyone is working together to rebuild and live in harmony.