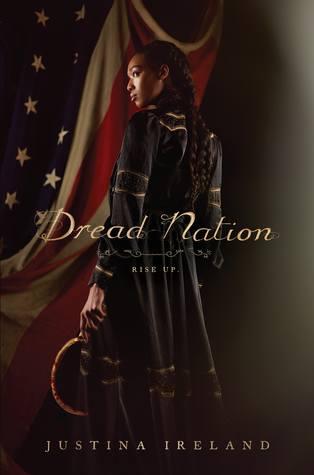 The Civil War ends when the dead rise up and start eating their fellow soldiers at Gettysburg. Now shamblers are everywhere, but the good folks are fighting back. Slavery has been abolished and the war is over because everyone must focus on surviving. Except everything isn't sunshine and glory. There is an act of Congress that forces all Native and Black people to attend combat schools to fight the shamblers. Of course the white folks don't have to go to these forced boarding schools. The combat schools, like Ms. Preston's, train girls to become attendants where they fight shamblers and protect their white mistresses.

Jane is in training at Ms. Preston's, but she really wants to get home to her momma at Rose Hill Plantation in Kentucky. Jane's rival at the school is Katherine who can pass for white and who likes the finer things. Jane and Katherine become aware of a number of disappearances in the area and poke their noses in where they shouldn't. Soon they are on a train to Summerville, Kansas, an Utopian enclave on the prairie. They convince the sheriff and preacher who rule Summerville that Katherine is a white lady, but Jane is forced to work protecting the town. Everything is definitely not as it appears in utopia!

I loved this audiobook. The narrator is wonderful and I didn't want to stop listening. I wasn't sure about the story. Zombies in the Civil War didn't sound that exciting, but this book, as all good zombie novels are, was about more than that. It was about the fact that slavery was just replaced by a different type of institutionalized labor. It was how the white folks were still trying to use the people of color to keep them safe and to do the work. Jane was a fantastic heroine to tell this story. She is strong and fierce and brave and intelligent. She is also snappy and a bit bitchy and I loved that about her. I adored her relationship with Katherine and how they changed from rivals to friends. Their conversations on race and "passing" were brilliantly done.

There is a lot going on in this book and not all of it is explained or wrapped up by the books end. Hopefully the second installment will be just as brilliant and explain a bit more about how this world works.