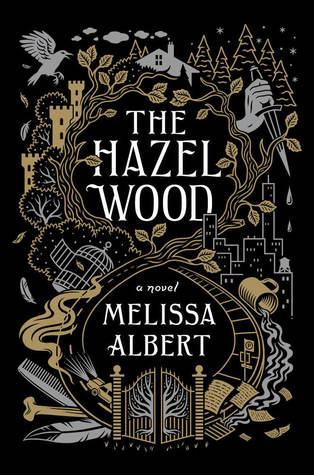 Alice and her mother Ella (real name Vanilla ugh!) have been on the run her entire life. They never stay very long in one place because bad luck always seems to find them. When Ella is kidnapped Alice decides she must find her grandmother's estate Hazel Wood. Grandmother Althea Proserpine is a reclusive author who wrote one book, Tales from the Hinterland. The book has a cult following and is extremely hard to find. Alice has only seen it once and never read it. So she teams up with schoolmate Finch who has read the book to find her mother and the Hazel Wood.

I didn't hate this book, but I really didn't like it either. It seemed like a book struggling with its identity. It is supposed to be a fairy tale fantasy, but you really don't get that element until the final third of the book. The first half is a road trip mystery tale. This part kind of worked even if it was too long and boring. The fairy tale bit really fell apart for me. I kind of felt like the book was trying too hard and not succeeding at all.

There were also problematic bits. The first was how completely unlikable Alice was as a character. She was bitchy and snide and violent and completely self-absorbed. And I am not sure that was all intentional on the part of the author. I feel like the reader was supposed to root for Alice to succeed, but I really could have cared less if she got stuck in the hinterland.

The part that really stuck out to me as awful was the portrayal of Finch. Finch is a rich NY kid who just happens to be biracial. He is portrayed as uber hipster with distant parents and too much money. He is also a fan of Tales from the Hinterland, which immediately makes him suspicious to Alice. The terrible part is that he is described as unattractive over and over. So the only person of color in the book is unattractive, when no one else really has comments on their appearance. Then there is a whole passage where Finch tries to explain racial profiling and why he was afraid of a traffic stop. Alice blows him off by saying he is rich so his color doesn't really count. This made me cringe so hard!

The only part I truly loved were the Tales from the Hinterland stories. We get parts of several of them and full tales of a couple. They were fantastically dark and twisted and thoroughly enjoyable. The rest of the book was fairly boring, weirdly ragged in its storytelling, and didn't make sense half the time.