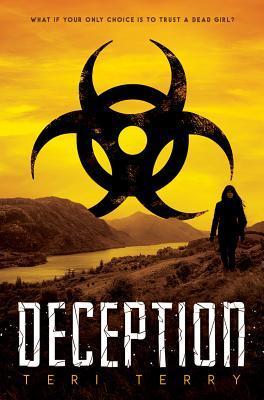 Deception picks up right where Contagion left off. Shay is convinced she is the cause of the epidemic, not realizing it is really Callie. So Shay has turned herself in to the Army who of course want to whisk her away to do secret research on her. So Kai and Callie are on their own and Kai of course can't see or hear Callie. Callie knows she is the true cause of the epidemic. It is following in her wake and millions are dying around her. So what does she do? Of course, follow Kai to heavily populated areas.

We also meet other survivors and those who are hunting them. The average human believes the survivors are somehow the cause of the epidemic and want them dead and burned. The shadowy army guys are hunting them to hide their tracks. Then comes the love triangle as Kai meets another survivor who has the hots for him. Of course he just loves Shay...or does he?

We also get to know more of the people behind the epidemic like Kai's stepfather, Callie's father and mysteriously also Shay's father. He is super suspicious and I am not sure why anyone would consider trusting him, but they do. I liked the addition of the other survivors rescued from the facility where Shay was being held. I didn't like Kai's new love interest or how quickly that turned south. But I am still eagerly awaiting the third book in this series to figure out how this is going to end. Not well is my guess!