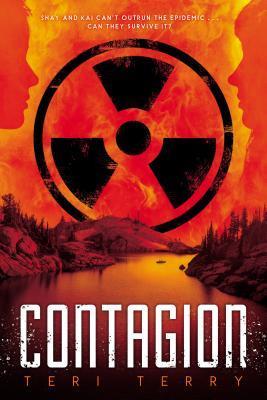 A ghost, a girl with supernatural powers and a hot guy battle their way through an epidemic. Of course they did not start out that way (except the hot guy). Callie is our young ghost. She was part of an experiment in a facility on Shetland Island. She was cured of the plague but didn't survive the cure by fire they treated her with. After the facility is overrun by the deadly contagion she escapes to the mainland of Scotland. There she tries to find her family.

Shay lives with her mother in Scotland. After running from a bully, she sees a poster about missing Callie and realizes she saw her the day she went missing. She contacts Callie's family and brother Kai comes to see her. Kai and Callie try to figure out what happened to Callie even though they really have no leads. Then a plague starts sweeping through Scotland and England. Kai turns out to be immune but Shay gets the plague and survives. Now she has powers she can't understand. She can influence people and see auras around everything. She can connect with animals around her. Her powers continue to grow and now she can see ghost Callie. It is only survivors or those about to die who can see and communicate with Callie. Now the three of them are trying to figure out what is going on and to outrun those who are trying to capture them.

I could not put this book down. I was riveted from the first moments of Callie's story. I loved how Kai and Shay became part of that story and how we learned more and more about the plague and its deadly consequences. The shadowy government agents in the background trying to cover things up just added to the thrills and chills. I was thrilled that I had access to the second book in the series already!