Stand on the Sky 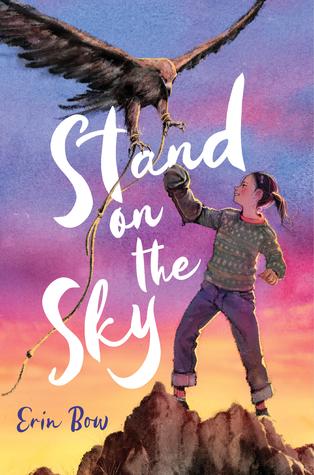 Stand on the Sky

Aisulu lives in with her family in a ger in the Kazakh mountains. They are nomadic people who move with the seasons as their herds need. Aisulu dreams of being more than a dutiful daughter. Her brother Serik is the prince of the family, destined to oversee the family one day as their uncle has no children. Tragedy strikes one spring day when Aisulu and Serik are caught in the mountains during a summer blizzard. Aisulu finds out that Serik has a lame leg and he believes it will cause him to lose his place in the family. Then they see an eagle and Serik sees a way to redeem himself. Unfortunately, things do not go well for either Serik or the eagle. His leg breaks and he is taken hundreds of miles away to the nearest hospital.

It turns out he has cancer and loses his leg. Aisulu is left without her immediate family and taken in by her uncle Dulat and aunt the Fox Wife (so named because she comes from a different people). Aisulu knows the eagle they hunted had a chick and that the chick will die without its mother. So she climbs the cliffs to rescue the chick and bring it home. The Fox Wife helps her learn to feed and care for the baby eagle Toktar even though girls can't have eagles.

Eagle Hunters are prized among their people. They are called Burkitshi and highly regarded. It takes great skill and courage to capture an eagle, bond with it, and then have it hunt for you. Only men become Burkitshi. Dulat was an eagle hunter in his youth and tries to claim Toktar from Aisulu, but he is too late. They have already bonded; the eagle is Aisulu's.

Then her father returns with news of Serik. He needs a prosthetic leg and rehab if he is going to walk again. That costs money and must be done far away. The family must either sell their portion of the herd and ger or Aisulu can win the Eagle Competition. No girl has ever won, but Aisulu is determined and Dulat is willing to teach her.

I adored this book more than I can even express. I loved Aisulu's spirit and determination and willingness to buck tradition. I loved that her family supported her and that they did not try to push her into the "women's" roles once she had her eagle. I adored the Matchmaker who forced her horrid son to help outfit Aisulu for the competition. I loved the old Burkitshi who sponsored Aisulu. And I loved the bond between Aisulu and Toktar. The only thing that would have made this book even better is if it had been written by someone from that culture. But Erin Bow did such a fantastic job with her research that I believed she knew what life in a ger was like; what life on the plains of Kazakhstan was like. I am going to recommend this book to anyone and everyone; it is one of my favorites of the year.