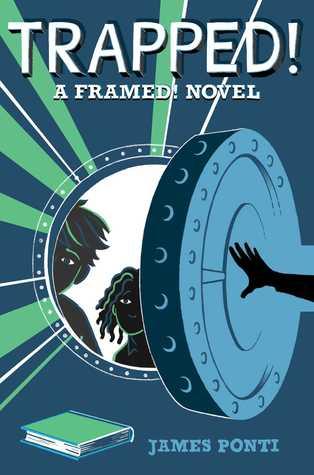 Another fun adventure with Florian and Margaret. This time we got the chance to get to know Marcus better. Also the strain between the kids is stretched to the breaking point over the truth behind Margaret's birth parents. Here's hoping this isn't the last story we get to read about this wonderful group of people.

Florian Bates—the only kid on the FBI Director’s speed dial and several international criminals’ most wanted lists—must save his friend from being framed for a crime he didn’t commit in this hilarious third novel in the Framed! series. Middle school is hard. Solving cases for the FBI is even harder. Doing both at the same time, well that’s just crazy. But that doesn’t stop Florian Bates! Along with his best friend, and Watson to his Sherlock, Margaret, Florian’s making the case that kids can do anything. When Florian and Margaret’s FBI supervisor, Marcus Rivers, is accused of a crime, it’s up to this mystery solving duo to jump into action and clear his name, because Marcus is more than their boss—he’s family. The case involves one of Marcus’s first investigations for the FBI and a Russian spy ring. However, when the spy they are chasing learns what they’re up to, the tables are turned, and Marcus finds himself implicated in a variety of crimes, including theft, corruption, and espionage. For Florian and Margaret, it just got personal. They’re going to catch the spy and clear Marcus’s name…even if they have to break into (and out of) the Library of Congress to do it.
Goodreads.