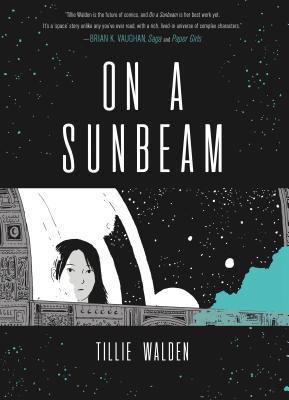 This unique graphic novel takes us on an epic journey to reclaim lost love. When Mia joins the reconstruction crew, she doesn't expect the crew to become her family. She's still trying to get her life together after a challenging childhood and adolescence. As such, she's prone to making mistakes and taking risks that could jeopardize the entire crew. The rest of the crew, however, has more or less "adopted" her into their ragtag space family and are willing to do what it takes to keep everyone safe and together.

Told in alternating time frames from Mia's point of view, readers get a taste of the past that drives Mia as well as an understanding of how she's trying to grow as a person. The artwork is lovely and inventive. The cast of characters is almost entirely queer women, with the exception of a non-binary crewmate. In fact, I'm not certain there are any men appearing at all in the comic. Which is kind of cool for a sci-fi story. Walden hit it out of the park with her previous graphic novel, Spinning, and this newest effort shows that she's expanding her already-impressive comic-writing chops.