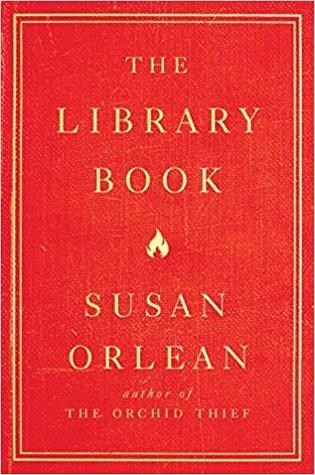 On the morning of April 28, 1986, patrons and staff alike filed outside during what they originally believed was a fire drill at the Los Angeles Public Library. Roughly half an hour later, smoke in the air confirmed that this was not a drill. For seven hours, firefighters fought the blaze the wound up destroying hundreds of thousands of books as well as countless other items from a wide variety of collections. It was the largest library fire in the US. Investigators determined that the fire was likely arson, so the hunt for the culprit began. After months of nothing more than rumor and speculation, a suspect was finally identified in Harry Peak. Charges against Peak never ended in a conviction, so his role in the fire is still up for debate.

Orlean takes readers through the day of the fire before delving into the history of LAPL - the institution, the building, the staff, and the collections - as well as the backgrounds of the major players and Orlean's reasons for writing about the library fire, which makes this far more than just a true crime book. It's a love letter to libraries. It's a fascinating history of a major LA institution (which means it's also a bit of a history of early LA). It's a mosaic of the intriguing characters who have helmed one department or another in the library's history. It's a lot of things in one book, which makes for a lot of geeky fun (particularly if you're a librarian). Readers who love libraries and fans of history will find a lot to enjoy here. True crime fans might be slightly disappointed to find that the focus frequently shifts away from the circumstances surrounding the fire itself. I personally enjoyed reading this book on a number of levels.