Struttin' with some Barbecue: Lil Hardin Armstrong Becomes the First Lady of Jazz 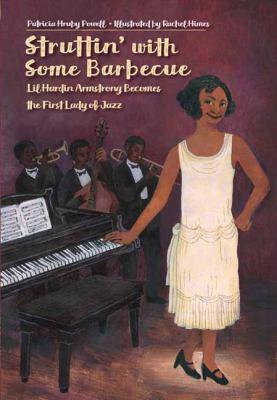 Struttin' with some Barbecue: Lil Hardin Armstrong Becomes the First Lady of Jazz

This biography tells the story of how Lil Hardin Armstrong became the first lady of jazz. She is primarily known as Louis Armstrong's wife but Lil was her own force to be reckoned with in the jazz scene. Brought up in Tennessee by her mom and grandmother, it was important to them that Lil get an education. She showed an early interest in playing piano and was taught by her school teacher. Later she got a job demonstrating pianos in a music store by playing 8 hours a day. She earned a reputation for playing swinging jazz and was offered a job with King Joe Oliver and his band. It was when she was with them that she met Louis Armstrong.
Lil was a fantastic jazz pianist and composer with some of her compositions still being played today.
It was gratifying to read about this important woman in jazz history who overcame racial and gender discrimination to make a name for herself in a time when it was hard for women to succeed in a man's world.