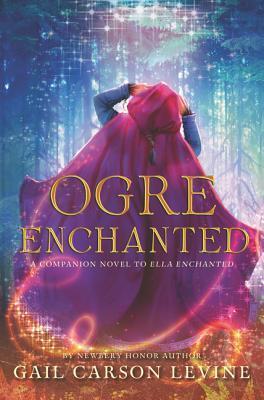 This was a fun story about wishes, dreams, and desires. Sometimes a person needs to live in another's shoes to truly understand the concept of love, devotion and true friendship. Evie thinks she has her life all mapped out until a fairy named Lucinda turns it upside down. Her best friend Wormy wants more than just being her test subject which results in Evie becoming an ogre with human feelings. It's a twisted tale to find true love, honest friendship, and a meaningful path in life. Along the way you will meet a wide variety of characters, some nice and some not so much. Sit back and enjoy this twist on several fairy tales. You might think twice about wanting a fairy godmother!

In this prequel to Ella Enchanted, which can stand on its own, young healer Evie is transformed into an ogre by the meddling fairy Lucinda. She’ll turn back only if someone proposes and she accepts! Returning to the land and many of the characters from her beloved Newberry Honor–winning Ella Enchanted, Gail Carson Levine has written a delightful tale about a clever and endearing heroine who is determined to defy expectations. Evie is happiest when she is healing people, diagnosing symptoms, and prescribing medications, with the help of her devoted friend (and test subject) Wormy. So when Wormy unexpectedly proposes to her, she kindly turns him down; she has far too much to do to be marrying anyone. And besides, she simply isn’t in love with him. But a certain meddling fairy named Lucinda has been listening in, and she doesn’t approve of Evie’s rejection. Suddenly, Evie finds herself transformed from a girl into a hideous, hungry ogre. Evie now has only sixty-two days to accept another proposal—or else be stuck as an ogre forever.
Goodreads.