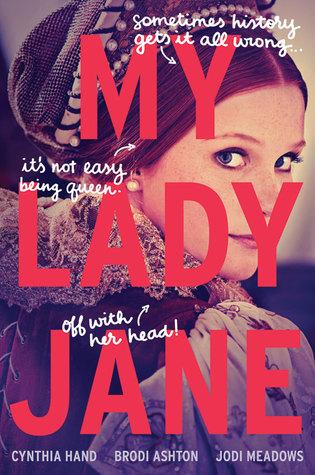 You probably think you know the story of Lady Jane Gray. She was made queen when Edward changed the line of succession to cut out Mary and Elizabeth. She lasted nine days before Mary took over and had her charged with treason and had Jane beheaded. That is not this story. This is how history should have happened, at least according to our lovely authors. The basics are still there but it turns out it is not a war between Catholics and Protestants that set off the whole chain of events. It is a war between Verities and Eðians (ethians). Eðians can shape shift into animals. King Henry was of course a lion. Verities are just regular people and resent the fact that those animals came to power. They want to purify the country. Mary is their leading supporter.

So Jane does marry Gilford Dudley, who spends his days as a horse. She does become queen for a little over a week under protest. In fact, Jane protests a lot: marriage, the crown, having her books taken away. Mary does seize the crown, but that is when things change. Turns out Edward was not dead. He had been poisoned by his chief adviser and Mary and in his hour of desperate need turned into a kestrel and flew away. While Jane is waiting to be executed she too finds her inner animal and turns into a ferret, rescues G and runs away. Elizabeth finds them all in the country with dear granny (who is a skunk) and they concoct a plot to take back the thrown.

There is quite a bit of revision to history that surprisingly works here. Who doesn't want to see Mary deposed and Elizabeth on the throne faster than history tells us. There is a bit of romance for both Edward and Jane. There is a lot of stealing of Shakespeare. Although since we can't prove Shakespeare really existed maybe history actually stole G's lines! I would highly recommend listening to this one as it was an amazing audiobook. The narrator is perfect.