For a Muse of Fire 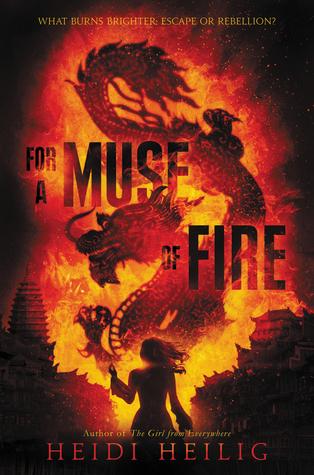 For a Muse of Fire

Jetta and her family are the most talented shadow puppeteers in Chakrana, mainly due to Jetta's unique supernatural abilities. She is able to bind the souls of the dead to her puppets, creating spectacles never before seen. As impressive as her talents are, she must never let anyone outside of her family know what she can do since necromancy is illegal. Nevertheless, she and her family hope to parlay their increasing fame in shadow puppetry into a trip to Aquitan, the overseas seat of power. There, Jetta hopes to drink from the fabled spring that might cure her "malheur" (essentially, bipolar disorder) as it has been rumored to aid Aquitan's le roi fou (the Mad King). The family is well on their way to gaining royal favor when a rebel attack forces a significant change of plans.

I geniunely enjoyed this series opener, which was something of a relief since I had also enjoyed Heilig's previous duology and this plot seemed like it could be hit or miss. For me, it was a well-paced, well-plotted hit. Jetta is a sympathetic character, as are her parents. Jetta lives with a mental illness and it is one of the driving forces in the plot. Secondary characters, both villainous and virtuous, are intriguing and nuanced, in particular Leo and the ladies of La Perl. The magic system feels fresh, but not completely unfamiliar. Hand this one to readers looking for a fantasy that doesn't read or feel like any they've read before.