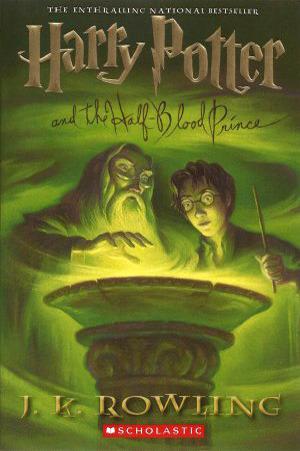 Even though I know what is coming in this book, it still hits hard. There is so much happening in this story that is dark and fore-boding, but also such a forecast of the last book. It is fun to see Harry as Quidditch captain and to see the developing relationships. Ready to finish out the series in audio, but may have to take time to re-read them all now.

When Harry Potter and the Half-Blood Prince opens, the war against Voldemort has begun. The Wizarding world has split down the middle, and as the casualties mount, the effects even spill over onto the Muggles. Dumbledore is away from Hogwarts for long periods, and the Order of the Phoenix has suffered grievous losses. And yet, as in all wars, life goes on. Harry, Ron, and Hermione, having passed their O.W.L. level exams, start on their specialist N.E.W.T. courses. Sixth-year students learn to Apparate, losing a few eyebrows in the process. Teenagers flirt and fight and fall in love. Harry becomes captain of the Gryffindor Quidditch team, while Draco Malfoy pursues his own dark ends. And classes are as fascinating and confounding as ever, as Harry receives some extraordinary help in Potions from the mysterious Half-Blood Prince. Most importantly, Dumbledore and Harry work together to uncover the full and complex story of a boy once named Tom Riddle—the boy who became Lord Voldemort. Like Harry, he was the son of one Muggle-born and one Wizarding parent, raised unloved, and a speaker of Parseltongue. But the similarities end there, as the teenaged Riddle became deeply interested in the Dark objects known as Horcruxes: objects in which a wizard can hide part of his soul, if he dares splinter that soul through murder. Harry must use all the tools at his disposal to draw a final secret out of one of Riddle’s teachers, the sly Potions professor Horace Slughorn. Finally Harry and Dumbledore hold the key to the Dark Lord’s weaknesses... until a shocking reversal exposes Dumbledore’s own vulnerabilities, and casts Harry’s—and Hogwarts’s—future in shadow.
Goodreads.