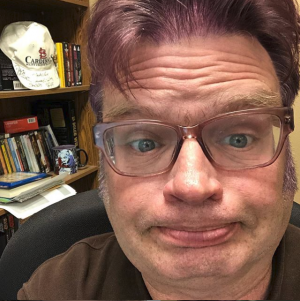 I have been called odd my entire life.  Growing up, when people used the word “odd” it was meant as a negative connotation.  Today the word “odd” could go either way, but most people use it in a positive way.  I don’t mind being called odd because it shows I have my own identity.  Now people say, “a special snowflake” instead of odd.  But, the great thing about snowflakes is their individuality and when they gather together, snowflakes can stop the world (both people snowflakes and winter snowflakes.)

As a culture, we worry too much about what people think.  Why should their opinion matter at all? If you are trying to get hired for a job it might matter but there aren’t too many places I would worry about the opinions of others.  If people do not accept you for who you are, then they are not really people you would want to be with anyway.

I’m over fifty and have purple hair, dinosaur earrings and other quirks people might find odd.  I’m truly a special snowflake. The truth is these people are not normal either because normal doesn’t exist.  Some people prefer to have a more conservative attitude in the way they dress and live and that’s fine.  Some are more expressive, others are not expressive at all. What counts is how we treat each other, not how we want others to live.  Andy, a character from the Stephen King story, Shawshank Redemption, puts it best, “I guess it comes down to a simple choice, really. Get busy living or get busy dying.”  We spend so much time looking for the negative or the monsters in the world, that we forget to live and express ourselves and be a positive influence in the world.