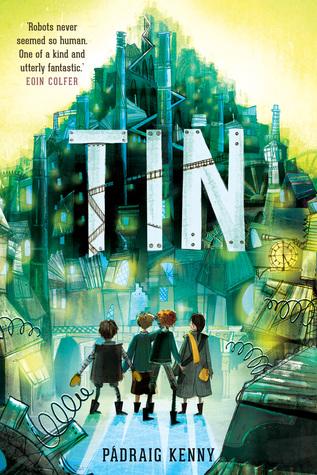 Tin is a set in an alternate England between the two wars. It is a time of machines built by the greatest engineers of the age. Absalom is not one of the greatest engineers even though he does like to brag. He works out of a scrap yard and tries to get work for his mechanicals: Jack, Rob, Amanda and Gripper. He is aided by Estelle who makes skin and Christopher his adoptee. When an accident reveals Christopher is not actually "proper" but an ensouled mechanical things go sideways fast. The agency comes and takes him away and the rest of the mechanicals set off to find a way to get him back. They find Philip Cormier, the premier engineer who retired after an accident.

Turns out Christopher was not stolen by the Agency but by Richard Blake the son of an engineer who was killed in the same accident Cormier was involved in. Blake is determined to finish the work his father started no matter the cost. And he is a bit crazy! They must find Blake and stop him before he completely destroys everything.

I loved this book way more than I thought I would. The cover kind of gave me a Wizard of Oz vibe and there is a bit of that in the story. I liked the steampunk and the different kinds of mechanicals. I was horrified at how truly evil Blake turned out to be. It went way further than I expected. The murder of one of the mechanicals was also so heartbreaking and horrifying that I was a bit taken aback. The only thing I didn't think made sense was that the engineering was controlled by glyphs that you could just draw in the air. It was a bit to magical for how I imagined the world to be.