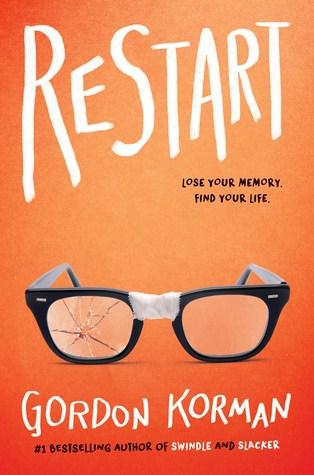 Chase Ambrose falls off his roof and can't remember a thing. Physically he is fine, but the concussion he suffered from means his memories of the last 13 years are all gone. That might not be a bad things since it appears Chase wasn't the nicest kid. In fact, Chase might have been the furthest thing from a nice person. Even his 4 year old half sister seems afraid of him. That Chase isn't who the new Chase wants to be though. He doesn't feel the need to be the football star bully of the school anymore and he doesn't really like his old friends Bear and Aaron. He now enjoys being a member of the video club and hanging out with Brendan and Shoshanna. He even likes the nursing home where he and Bear and Aaron are doing customer service. What happens when he starts remembering his old self though?

I had a hard time getting into this one. It took me almost a week to read. I ended up enjoying the story, but just didn't connect to it. Even though it may seem fantastical that a 13 year old would get amnesia and have a personality change, it actually worked and seemed fairly realistic. The new Chase and the old Chase kind of collide toward the end. I do wish the end wasn't so extremely happy. That was the one part of the story that didn't seem realistic to me.