The Orphan Band of Springdale 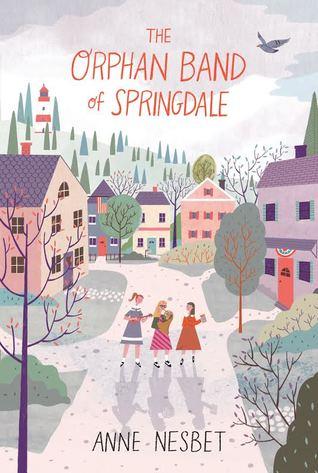 The Orphan Band of Springdale

Augusta has been sent to live with her grandmother in Springdale, Maine. It is the eve of WWII and her mother is working in New York and her father, a union organizer, is on the run from the law. Gusta arrives at Mrs. Hoops home to join the orphans already in residence. She brings very little with her except stories of a missing wish and her French horn.

There is a lot going on in this story. Gusta's love of her French horn is in direct competition with her desire to help her Uncle Charlie who needs an operation. The French horn is worth the same amount needed for the surgery and the music teacher is willing to sell it. Gusta needs glasses but is very resistant to them at first. She is also shocked by how clearly she can see once she gets them. To pay for the glasses she works for the German optometrist. There is also the missing wish and the story of the sea captain great grandfather. At school Gusta makes friends with kids and gets in the middle of the dairy wars. She and her cousins also start the Honorary Orphan Band to compete at the local fair.

This is a slice of life story about what it was like on the eve of WWII. Because Gusta has a German last name she experiences prejudices. The German optometrist does as well. She also steps in the middle of a family secret and causes a scandal. I wanted Gusta to stand up for herself long before she did. The misunderstandings in the story seemed extreme, especially Mr. Kendall.