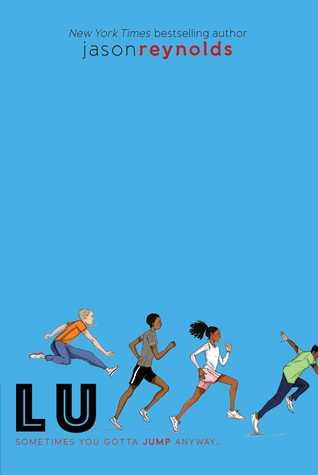 Lu is the final book in Jason Reynolds' Track series. It follows Lu the final "newbie" on the Defenders Track Team. Lu is albino and has to deal with things like sunscreen and vision correction. He also deals with other kids teasing him for his lack of pigment. Lu's dad has a shady past that he has overcome, but it comes to light that part of that past intersects with Coach's past in a tragic way. Lu is trying to do hurdles for the team and struggling. He is also going to be a big brother for the first time.

I adore Jason Reynolds. I think he speaks with a voice that kids, especially kids of color, respond to. I loved Ghost, but can't say this is one of my favorites. Lu just didn't speak to me like Ghost or Patina did. I didn't find his story as compelling either. And his internal voice was a bit annoying (I actually found myself skimming some of his internal monologues.