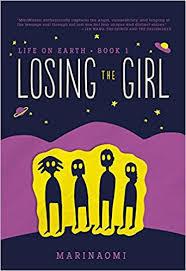 A group of teens struggle to navigate the complexities of adolescent life. The narrative switches from teen to teen (and graphic style to graphic style), each part picking up where the last one left off. In the background, there's frequent mention of a missing girl and the theories that she might have been abducted by aliens. Is it tied into the fact that everyone's phone seems to be out of service? Who knows? There aren't any real answers here. Presumably, they'll be addressed in future volumes.

What this graphic novel does well is capture the emotional pull of the central character's individual stories. The sci-fi aspect, while presented as central to the story on the back cover (and even in the front cover art), is almost non-existent. Readers might be disappointed by the lack of actual aliens in the plot, but they'll also be surprised by the deft handling of some pretty heavy issues. It's kind of a mixed bag, but it's a quick read, so it's worth a shot.