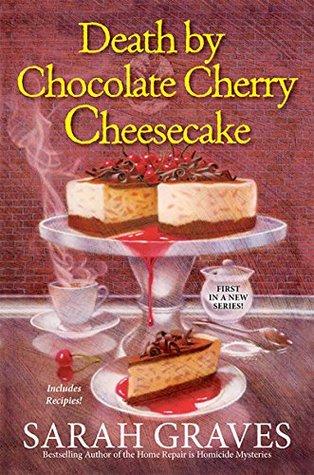 A fun mystery using one of my favorite foods as a character. Never met a chocolate, a cherry, or a cheesecake I didn't like, so this was clever and made me hungry. Not a bad cast of characters and I will probably check out the next one in the series to see if it is as entertaining or is too predictable.

Life just got a little sweeter in the island fishing village of Eastport, Maine. Jacobia “Jake” Tiptree and her best friend Ellie are opening a waterfront bake shop, The Chocolate Moose, where their tasty treats pair perfectly with the salty ocean breeze. But while Jake has moved on from fixing up houses, she still can't resist the urge to snoop into the occasional murder. Jake and Ellie have been through a lot together, from home repair to homicide investigation. So when they decide to open a chocolate-themed bakery, they figure it’ll be a piece of cake. With Ellie’s old family recipes luring in customers, they expect to make plenty of dough this Fourth of July weekend. Having family home for the holiday only sweetens the deal for Jake—until the ill wind of an early-season hurricane blows up her plans. When the storm hits, Jake’s grown son Sam is stranded in a Boston bus station, and her husband Wade is stuck on a cargo ship. But as bitter as the storm is, something even more sinister is brewing in the kitchen of The Chocolate Moose—where health inspector Matt Muldoon is found murdered.
Ellie never made a secret of her distaste for Matt, who had been raining on their parade with bogus talk of health code violations. Now, with no alibi for the night of the murder, she’s in a sticky situation with the police—and it’s up to Jake to catch the real killer and keep Ellie living in the land of the free. Includes a Recipe!
Goodreads.