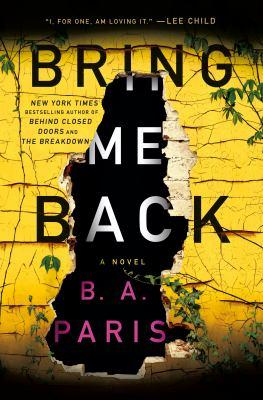 The past comes back to haunt Finn McQuaid, who is brought up short by what seems the reappearance of his former lover, Layla, who vanished 12 years earlier. After being cleared of Layla's murder, Finn gradually became close to her older sister, Ellen, and they were recently engaged. Then the appearance of a set of Russian dolls significant to only Layla, Ellen, and Finn suggest that Layla may be alive and nearby. In Paris' previous thrillers, male characters have turned out to be not what they seem; this is also true of Finn, known as a gentle giant in his youth before his hair-trigger temper showed itself. But the questionable character of Finn pales compared to those of Layla and Ellen, as they seem to compete for the man they both love, and questions of sanity arise. The narrative toggles between the past, when Finn met Layla and their relationship developed, and the present, as Finn's comfortable life is splintering. Paris adroitly ramps up tension to a complicated resolution that feels a bit drawn out. Compelling much of the way, but finally less satisfactory than Paris' previous The Breakdown (2017).--Leber, Michele Copyright 2018 Booklist
From Booklist, Copyright © American Library Association. Used with permission.