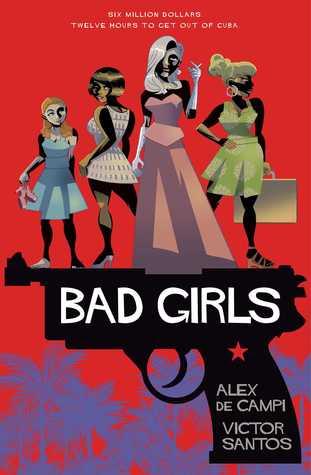 While the graphics and color was wonderful, this story was not what I expected. It was much more violent and hard to follow. Not much background on each of the three women, so I found it hard to keep them separated.

In this heart-pounding, starkly colored, and visually stunning graphic novel, three women have twelve hours to get out of Cuba with six-million dollars on the night of New Year’s Eve 1958. Gangster’s moll Carole, jazz singer Taffy, and mambo queen Ana all have their reasons for needing to escape the El Eden Casino in Havana. And on the tumultuous night of New Year’s Eve, when Cuban dictator Fulgencio Batista flees the country and the nation falls to Fidel Castro, they get their chance...with the help of six suitcases filled with stolen dirty money. Of course, it’s one thing to get the cash...and quite another to get off the island alive. From the Eisner-nominated writer Alex de Campi and virtuoso artist Victor Santos, this story of three strong and multifaceted women struggling to leave their pasts behind in a tension-filled getaway is timely, fast-paced, and gripping.
Goodreads.