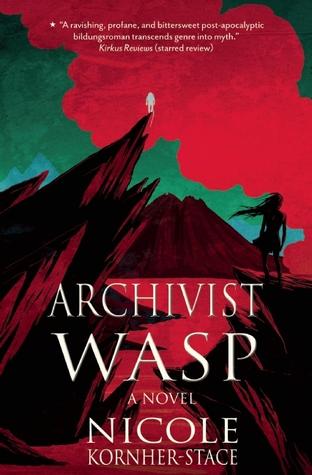 Wasp has been the Archivist for three years. In her post-apocalyptic world, this means that she hunts ghosts, records any information she can glean from them, and then sends them on to whatever lies beyond for ghosts. In addition to the dangerous duty of ghost-hunting, Wasp is also expected to literally fight (to the death) for her position once a year in a bloody battle against the young upstarts who would take her place. Wasp has grown desperately weary and disillusioned with her appointed role and yet self-preservation demands that she continue to fulfill it.

When a ghost appears that breaks all previous preconceptions of how ghosts are supposed to behave and offers Wasp a deal that includes a way out of the life she's been leading, Wasp finds she can't resist. Her mission is now to help this nameless ghost find its old partner, also a ghost. Their journey will take them into the world of the dead; a dangerous and baffling place with a logic all its own. As the search persists, resulting in more questions than answers, Wasp is confronted with revelations that shake her to the very core of her being. Time is running out, however, and Wasp has some decisions to make; decisions that could have the potential to change not only her life, but to remake the world as she knows it.

There's no easy way to describe Archivist Wasp. This genre-defying teen novel is part post-apocalyptic bildungsroman, part ghost story, part superhero origin story, and part mystery. With all these seemingly disparate story elements, one might expect this to become something of a muddled mess. Fortunately, Kornher-Stace makes it work by creating a world that is so beguiling with characters so fascinating that readers will be hard-pressed to put this book down. Intricate plotting, impeccable pacing, and taut writing also help keep the pages turning. Add to this winning combination enough symbolic imagery for readers to ponder over for days and the result is a deeply satisfying reading experience. Readers looking for something above and beyond standard genre-bound fare will find a lot to love in Wasp’s story.