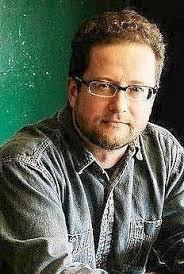 Daren Dean will discuss The Black Harvest, his recently published novel that evokes a complex epoch of American history. It's the story of Ashby Marchbanks (or "Preacher"), who falls in with William Clarke Quantrill's deadly bushwhackers. They fight battles on their own terms without the sanction of Jefferson Davis and the impromptu Confederate government. Preacher becomes well acquainted with rebels like Frank James and his brother Jesse. They fight with many others who would become notorious in their own right under Captain Bloody Bill Anderson in the waning days of the American Civil War. Theirs is a war for survival on the border where violence between Kansas and Missouri began long before Fort Sumter.

Dean is also the author of the novel Far Beyond the Pale and the short story collection I'll Be Here Long After You're Gone. He holds an MFA in creative writing from the University of North Carolina at Wilmington, and is an assistant professor of English at Lincoln University. His work has been published by national and regional publications, including The Huffington Post, Midwestern Gothic, and StorySouth. He was recently nominated for two Pushcart Prizes in short fiction.

His book will be available for sale and signing after the program.