A Year of Mystery with Fiction at Noon 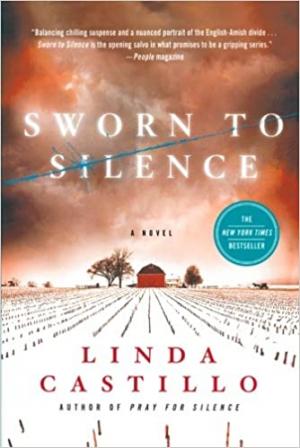 A Year of Mystery with Fiction at Noon

Since 2006, I've led a book discussion group called Fiction at Noon with my coworker Kathy (now retired). We are lucky to still have most of the original participants and have added new friends along the way.

This year, we proposed a year of mystery to the groups and, as a result, have read the works of several good mystery writers. Two of my favorites this year have been "Magpie Murders" by Anthony Horowitz and "Test of Wills" by Charles Todd.

Last month, we read another great mystery by Linda Castillo, previously unknown to me. "Sworn to Silence" (2009) is the first in the Kate Burkholder series set in Ohio's Amish country, where farming and tourism drive the local economy.

Chief of Police Kate Burkholder is no stranger to Painters Mill, Ohio. She grew up in the town's Amish community and left the sect for Columbus at 18. She attended the police academy and quickly entered the Columbus Police Department. Two years ago, Kate was offered the job as the chief of police in Painters Mill. The "powers that be" hoped her previous connection to the Amish community would serve to improve the relationship between the local Amish and English communities.

Sixteen years ago, before Kate's departure, she and the townspeople were stunned by the brutal murders of four local women. The tranquility and innocence of this peaceful farming community were forever altered by these senseless tragedies. The murders stopped, but the killer was never officially found.

Now, another young woman has been murdered and the Slaughterhouse Killer seems to be back terrorizing their town. A secret Kate and her family have been hiding makes this situation seem even more impossible. Past and present collide in this page turner of a book.

Though not a mystery reader by nature, I have thoroughly enjoyed branching out and introducing myself (and others) to new authors. Castillo is impressive. She writes with the level of detail I appreciate in any novel.

Castillo was born in Ohio and she writes with the perspective of a native. Her elaborate landscape and winter weather descriptions gave me a real sense of Ohio's Amish country. "Sworn to Silence" is brimming with strong, flawed yet likable characters along with a killer you wish you could forget.

This book is not for the faint of heart. The murders are graphic in such a way that may detract some readers from enjoying the book. Admittedly, these murder scenes are tough, but Castillo's storytelling ability prevailed in my assessment, and I was immediately ready to pick up the second book in the series, "Pray for Silence."

Fiction at Noon meets again at noon Sept. 29 in the Mark Twain Room on the lower level of the Missouri River Regional Library. I want to personally invite you to join us as we discuss "Full Dark House" by Christopher Fowler, both in person and virtually.

For more information, email me at cookc@mrrl.org.