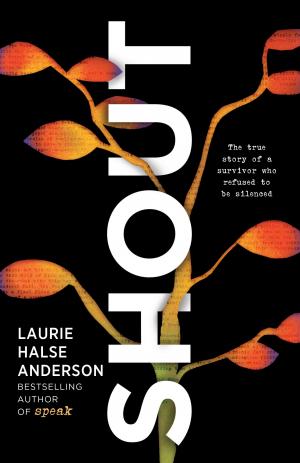 Twenty years ago, Laurie Halse Anderson felt driven by a voice in her to write a book about a young girl who was raped just before she entered high school. This book was Speak.  It sparked much controversy and many conversations about the trauma of rape and rape culture. Through the conversations with survivors after writing Speak and the #metoo movement, Halse Anderson again felt compelled to write Shout.  It is a book of free verse poetry that tells the story of her life including the trauma of her rape at thirteen. Classified as a poetic memoir, it is broken into three sections.

The first section deals with her childhood, the impact of living with a father who suffered from PTSD after serving in World War II. Her mother was a silent and sullen presence in her life. It tells of her struggles in school and her rape at age 13. It draws a bleak picture of her downward spiral and withdrawal into silence with no real friends and no parental relationship for support. It also tells of the redemption and healing she found in Denmark through a student exchange program.

The second section divulges her journey as an author and the impact of the stories of other survivors, her dealings with school censorship and her fight against it. In one poem titled “emergency, in three acts” she recounts a time when speaking at a school the principal actually pulled the fire alarm to silence her. While waiting in the parking lot, girls huddle around her, spilling their stories. After the alarms cease, the principal tells her her talk is over citing it is “not appropriate for the children under his care because those things don’t ever happen in his school.” Another quote from a poem titled “innocence” Halse Anderson observes, “The false innocence you render for them by censoring truth protects only  you.”

Halse Anderson wraps the book up in the third section revealing more about her family roots and her mother. The shortest section of the book, it reveals much of her mother’s story and gives some understanding to the roots of dysfunction in her family.

This book is about survival, finding your voice and healing. The subject matter is difficult and well worth the time. The author’s pain in this book is palpable but as you follow her journey, the book gives you hope. One of the most powerful quotes in the book is, “Many grownups tell kids to follow their dreams. Like that’s going to get them somewhere. Auntie Laurie says, follow your nightmares instead, cause when you find out what’s eating you alive, you can slay it.” Halse Anderson lost her voice when she was young, “I learned then that words had such power some must never be spoken and was thus robbed of both tongue and truth.” Through her experiences as an author, Halse Anderson’s voice has been found and it is one to be reckoned with.