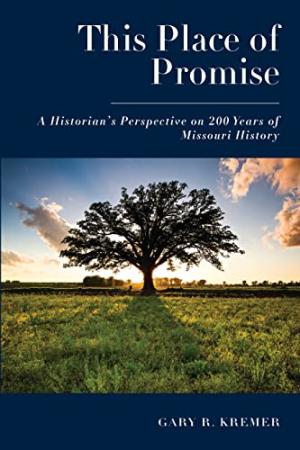 This Place of Promise: A Historian’s Perspective on 200 Years of Missouri History by Gary R. Kremer has been chosen for Missouri River Regional Library’s 17th annual Capital READ.  Conceived of as a way to commemorate Missouri’s bicentennial of statehood, this unique work presents the perspective of Gary Kremer, one of the Show-Me State’s foremost historians, as he ponders why history played out as it did over the course of the two centuries since Missouri’s admittance to the Union.

In the writing of what is much more than a survey history, Kremer infuses the narrative with his vast knowledge and personal experiences, even as he considers what being a Missourian has meant—across the many years and to this day—to all of the state’s people, and how the forces of history—time, place, race, gender, religion, and class—shaped people and determined their opportunities and choices, in turn creating collective experiences that draw upon the past in an attempt to make sense of the present and plan for the future.

"As a fifth-generation Missourian, Gary Kremer offers an in-depth look at the Missouri story,” says Madeline Matson, the library’s adult programmer. “His new book brings together his years of research and teaching into what makes this state unique. He explores how the state's history has been shaped by issues such as race relations, the urban-rural divide, religion and gender, and the role of government, all of which help explain how the past continues to affect the state and its residents."

In advance of Dr. Kremer’s featured presentation on Tuesday, September 27 at 7:00p.m. the library will host a series of September book discussions. These in-depth discussions will be led by community members who will not only focus on the book’s overall content but also on specific aspects of the state’s history as covered in the book.

Three of the four discussions will take place from 1 to 3 p.m. in the library art gallery, with an evening discussion on September 15.

September 22, Thursday 1-3p.m.
Bob Priddy, longtime broadcast journalist and author of The Art of the Missouri Capitol: History in Canvas, Bronze, and Stone; Only the Rivers Are Peaceful: Thomas Hart Benton’s Mural; and the multi-volume Across Our Wide Missouri with a special focus on writing Missouri history