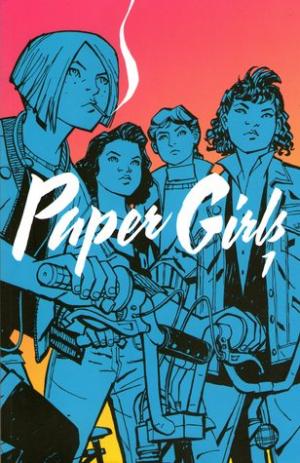 This very normal introduction to our main characters is only the beginning of what turns
out to be a very bizarre story.

As the girls continue with their route, they are jumped by other masked weirdos, who steal Tiffany’s coveted walkie-talkie (that she spent $49.99 on, “not counting tax or batteries”). Angry, Tiffany insists on finding the culprits. In their search, they find much more than they bargained for. The quartet are confronted with increasingly crazy and unbelievable things straight from pulp sci-fi, beginning with the discovery of an alien-like structure in the basement of an unfinished house and ending with challenging space-beings involved in an inter-generational war.

Paper Girls, Vol. 1 is one of the most consistently entertaining graphic novels I’ve read. I’m a fan of Brian K. Vaughan’s Saga series, and while this book is very different, it is just as good. The characters, four pre-teen girls, are vibrant, irreverent, and (best of all) interested not at all in romance. It’s a breath of fresh air when one is used to male-centered stories, especially in media surrounding the ‘80s. Vaughan and Cliff Chiang have created a wonderful, colorful, extraordinary coming-of-age story that puts tween girls front-and-center in an exciting, fast-paced sci-fi story that’s deliciously weird, in all the best ways.