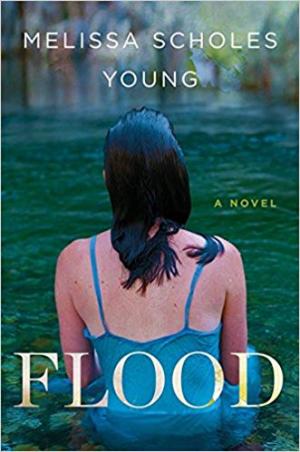 This year’s Capital READ title is by Melissa Scholes Young, a Hannibal native who now lives in Washington, DC, and teaches creative writing at American University. She explores the universal theme of escape and going home again in her first novel, Flood.

Laura Brooks left Hannibal 10 years ago during the great flood of 1993 and now returns home after an unexpected job layoff combined with some personal heartache. Hannibal, to Laura, represented confinement and a reminder that background mattered in a town divided between the haves and have-nots. Back home, Laura hopes to stay with her mother, with whom she has a dysfunctional relationship, and to regroup and decide her next move. She finds staying focused on her future difficult when there is still so much of her past she must contend with during her stay. Her high school best friend, her brother, a beloved aunt, and a former boyfriend all pull her back into the same kind of drama she left. Gradually, the reader learns what prompted Laura to sever ties with her high school sweetheart without explanation.

Young weaves the history of Hannibal in small sketches throughout the story and shows the influence of Mark Twain on the town and the region, from its riverboat days to its longstanding racial divide. These  sketches provide diverse perspectives about what makes Hannibal a unique Midwestern town.

Publishers Weekly described Flood as “a wonderful story of home, hope, and the ties that bind us to family.”

Each year, the Library hosts a series of programs leading up to the Capital READ author event:  On September 11, “The Great Flood of ’93: A Look Back at 25 Years” will feature Eric Schroeter, state design engineer for the Missouri Department of Transportation. He was active on the scene during the historic 1993 flood and the recovery afterward and will show video and talk about the flood damage and lessons learned after this historic event. On September 20, “Hannibal: History Past and Present” will feature Mary Lou Montgomery, who served many years as editor of the Hannibal Courier-Post, and has done extensive research and writing on Hannibal history. And those interested in discussing the Flood can attend a book discussion scheduled for September 17.

Melissa Scholes Young will be in town to speak on the evening of September 25 and even if you do not have a chance to read Flood before then, please don’t let that stop you from attending. Madeline Matson, our adult programmer, and I had the pleasure of hearing Young speak at the Unbound Book Festival in April, and she’s a wonderful speaker. You won’t want to miss her talk.