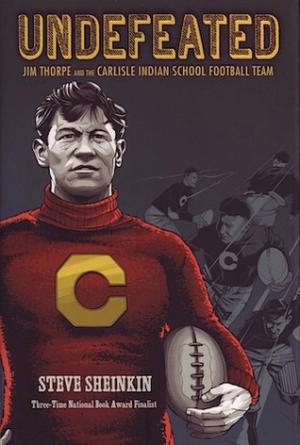 I am always drawn to underdog stories. I want to see the little guy make it big and defeat the big dog. Undefeated is definitely an underdog story. It is the story of legendary football player Jim Thorpe and how he and the Carlisle Indian School Football team, coached by Pop Warner, changed the game forever. They changed how it was played,  who dominated the sport, and made it into the game enjoyed today.

Jim Thorpe was an American Indian born in Oklahoma. He was a wild child and his father attempted to tame him by sending him to Indian boarding schools. Jim continued to run wild and ran away several times. It wasn’t until he was sent to the Carlisle School and his athletic abilities were recognized that he finally settled down. Jim was an athlete that excelled in everything he tried: football, baseball, basketball, and track.

Sheinkin fills this story with interesting bits of history. One thing he focuses on is the fact that people have been debating the safety of football from the very beginning and it is a lot safer now than it was then. Players died or were severely injured on a regular basis during the first days of football in the early 1900s. It was not a safe sport and many schools and politicians debated whether it should continue to be played. That debate continues today even though football is widely enjoyed by all ages.

Another area of history that really stood out for me was the Carlisle Indian School. This was not the type of boarding school that students competed to get into. Many students ran away from Indian Schools and many others died there. I do wish Sheinkin had spent a bit more time on forced boarding schools for American Indians and just how traumatic this was for those young people. He briefly touches on it and I realize that an entire book could be spent on the treatment of Native Americans by the US government. I am not sure readers will understand just how horrible these places were for the students and how they attempted to strip their Native identities away from them.

What Sheinkin does really well in this book is make football exciting. The descriptions of the games kept you on the edge of your seat and you could really feel the rivalries between the different schools. It was interesting that Carlisle was playing all these big ivy league colleges when its students graduated with basically a high school degree. Even with that unevenness in their educations, the Carlisle team still managed to become the biggest name in football.

I found Jim Thorpe’s life tragic, but fascinating. He was truly a gifted athlete and today would have been wealthy beyond measure. He could do it all it seems: football, baseball, track. He was treated horribly after the Olympics when his gold medals were stripped away because it was discovered he played semi-pro baseball for a couple of summers. The International Olympic Committee even said he should keep his medals, but the American committee took them away. Would this have happened if he was white? Most likely not. I also thought it was terrible that Pop Warner and Carlisle did not stand by him as they should have. He was betrayed by both his country and the people who were supposed to protect him.  His gold medals were eventually restored many years after his death.

Even if you are like me and don’t like football, I would still recommend this book as a fascinating read about a little known part of history and an interesting American athlete who deserves recognition for his achievements.